At Baselworld, Breitling announced three new exciting additions to its current collections for 2017 including the new Superocean Heritage II Collection, as well as the Navitimer Rattrapante and Avenger Hurricane Military.

The new spirit of discovery

Breitling has redesigned its Superocean Heritage line, dedicated to modern-day explorers. The result is a new face as original, pure and dynamic as ever, for this highly successful collection that is celebrating its 60th anniversary in 2017.

First launched in 1957, the Superocean professional diving watch – rapidly adopted by the first enthusiasts of leisure diving – has since spawned several generations of instruments boasting peerless aquatic performance. Yet Breitling has also preserved the spirit of the original model in a line named Superocean Heritage that has become one of the brand’s stellar collections, thanks to its unique and timeless look combined with cutting-edge technology.

To mark the 60th anniversary of this pioneer of wide-open spaces, Breitling had reinvigorated its iconic design while maintaining its unique character. The main development took the form of a new steel bezel with an ultra-hard high-tech ceramic ring that is scratchproof and extremely shock-resistant. The elimination of the metal ring surrounding the minute circle means the bezel appears to form a seamless whole with the dial in a matching color, adorned with the original Superocean logo. The unusual shape of the hands (triangular for the hours and lozenge-like for the minutes), along with the slightly cone-shaped hour-markers, reinforces ties with the 1957 model, while ensuring optimal legibility enhanced by luminescent markers.

The Superocean Heritage II is interpreted in two watch sizes (42 and 46 mm) and as a 46 mm chronograph, all available in three colors: black, blue and bronze. The latter versions are available with an exclusive brand-new rubber-leather strap in the same color and enhanced by contrasting stitching. In addition to the leather, crocodile or rubber straps, all the models may be fitted with a steel mesh bracelet echoing the legendary 1957 version.

In terms of performance, the Superocean Heritage II has all the technical qualities that have made it the perfect companion for the finest adventures on land, at sea and in the air. The Superocean Heritage II Chronographe 46 houses a selfwinding chronograph movement chronometer-certified by the COSC (Swiss Official Chronometer Testing Institute). The Manufacture Caliber B20 powering the Superocean Heritage II 42 and 46 models, also COSC-certified, is a high-precision, reliably robust selfwinding movement endowed with a 70-hour power reserve. Derived from the Tudor Caliber MT5612 and flaunting exclusive finishing, it represents one aspect of the recent cooperation between the two brands that are now pooling their expertise in the development and production of certain mechanical movements.

The sturdy steel case with its screw-locked crown is water-resistant to 200 m (660 ft). The fluted unidirectional rotating bezel, bearing a luminescent dot at 12 o’clock, is fitted with a 120-tooth system enabling extremely accurate adjustment and very smooth rotation – whether it comes to checking a dive time or marking off various time measurements, notably in aviation. The new spirit of discovery. 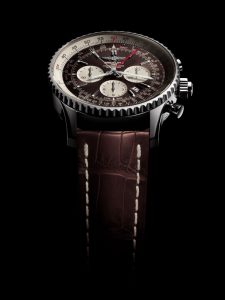 The ultimate mechanical chronograph
Breitling reaffirms its supreme mastery of chronographs by unveiling its own split-seconds chronograph movement – one of the most sophisticated horological complications. Developed in the spirit of instruments for professionals, this Manufacture Breitling Caliber B03 (protected by two patents) is distinguished by its innovative construction ensuring a maximum of precision, sturdiness and reliability. To present this major technical breakthrough, Breitling has chosen its most emblematic model, the famous Navitimer, interpreted in steel or gold with an exclusive bronze-colored dial.

Few watch brands have their own mechanical chronograph movements. Fewer still also offer a proprietary split-seconds movement genuinely developed and produced in-house. In launching Manufacture Breitling Caliber B03, officially chronometer certified by the COSC, Breitling is once again confirming its leadership position in the field of mechanical chronographs. It is also consolidating its crucial role in the development of this type of instrument – notably marked by the invention of the first independent pushpiece at 2 o’clock (1915), the second independent pushpiece (1934) and the first selfwinding chronograph (1969). This epic saga also includes the famous 1944 Duograph – one of the great Breitling classics – that is much sought-after among collectors and equipped with an ultra-thin split-seconds chronograph movement. 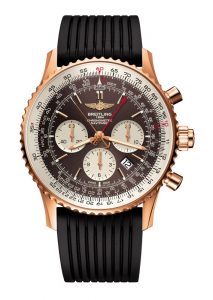 Aiming for performance
With its two superimposed central chronograph hands, of which one can be stopped so as to measure an intermediate (split) time, before “catching up” (rattraper in French) with the first one still sweeping onwards, the split-seconds chronograph is considered one of the hardest watchmaking mechanisms to create. That is why this “Grand Complication” is generally produced in small series and requires watchmakers to perform a lengthy process of adjustment and rating (correcting the clearance of the split-seconds wheel and pinion, adapting the tension of the springs, adjusting the degree of penetration of the clamps, etc.). In developing its own split-seconds chronograph movement, Breitling has adopted an innovative approach to this exceptional mechanism. True to its philosophy of “instruments for professionals”, the specialist of technical watches has opted to focus on sturdiness, precision and reliability as applied to large-scale production: “Quality in series”, as a 1940s Breitling slogan already proclaimed. The aim was to develop a system ensuring optimal performance with a minimum of components and serving to eliminate the lengthy adjustment process. In a nutshell, to find a simple and effective solution to a complicated problem – a task that took several years of research and testing. 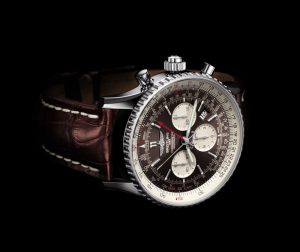 Revisited mechanisms
The major challenge for the developers of a split-seconds chronograph movement relates to the level of energy. The constant stopping and starting of the split-seconds hand results in variable energy requirements that can prove detrimental to chronometric precision and reduce a watch’s power reserve. One of the means of resolving this issue consists in equipping the movement with an isolating system serving to disconnect the split-seconds hand when it is stopped. This was the approach chosen by Breitling. However, the brand engineers and watchmakers revisited the construction of the split-seconds mechanism in order to achieve a more reliable and effective solution. They therefore developed two innovations for which patents have been filed. The first breakthrough relates to the isolating system. The component driving the split-seconds lever normally takes the form of a cylindrical pin: an organ that is complex to produce below a certain diameter. Breitling has replaced this pin by a stamped part enabling it to achieve a more precisely defined shape, as well as enhanced sturdiness. Thanks to this isolating system, the use of the split seconds hand has no impact on the precision of the timing, nor on the power reserve. The second innovation concerns the mechanism for stopping the split-seconds hand. Watchmakers traditionally use a wheel (either smooth or with extremely fine toothing) that is clamped in place. This system is complicated to produce and can lead to a certain degree of inaccuracy. Inspired by cycle brakes equipped with rubber pads, Breitling’s engineers had the idea of surrounding the wheel with an O-ring seal that would be compressed by the clamp. This results in extremely precise stopping and a system that is simpler to produce and thus more reliable. 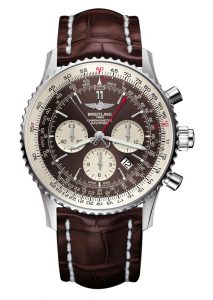 Smart architecture
In developing its selfwinding split-seconds chronograph Caliber B03, Breitling worked on the basis of its Manufacture Breitling Caliber B01, an intelligent platform that has already enabled the addition of other useful functions such as second timezone or worldtime displays featuring unprecedented user friendliness. The B03 therefore picks up all the advantages of this high-performance ‘engine’, including a 70-hour power reserve (guaranteeing enhanced rating regularity) as well as an innovative modular-type architecture. The split-seconds mechanism comprises just 28 parts. Regrouping most of these components in a module fitted between the mainplate and the calendar mechanism not only simplifies production and assembly, but also maintenance – since the watchmaker can remove the module as a single block for any servicing or repairs. Like all Breitling movements, the Manufacture Breitling Caliber B03 is chronometer-certified by the COSC (Swiss Official Chronometer Testing Institute), the only precision and reliability benchmark based on an international norm.

Navitimer Rattrapante: at the heart of prowess
To highlight its exceptional new ‘engine’, Breitling has chosen its famous Navitimer, the doyenne of all mechanical chronographs produced worldwide (since 1952). Equipped with a 45 mm case, the Navitimer Rattrapante comes in steel as well as a 250-piece red gold limited edition (equipped with a transparent caseback). Both watches are distinguished by their exclusive bronze-colored dial, serving as a backdrop for the silver-toned counters and inner bezel reflecting the classic Navitimer look. In an extremely refined detail, the B logo with its anchor symbol generally adorning the base of the Navitimer chronograph hands is in this instance divided between the two seconds hands: with the B on the red chronograph hand and the anchor on the split-seconds hand. This means the two elements are separated when the split-seconds hand is stopped, before reforming the brand signature when the hands are again overlaid. The split-seconds pusher, housed in the 3 o’clock crown, serves to stop and restart the split-seconds hand as often as desired during a timing operation – in order to measure split times or to compare the results of several competitors. The ultimate mechanical chronograph in a legendary watch. 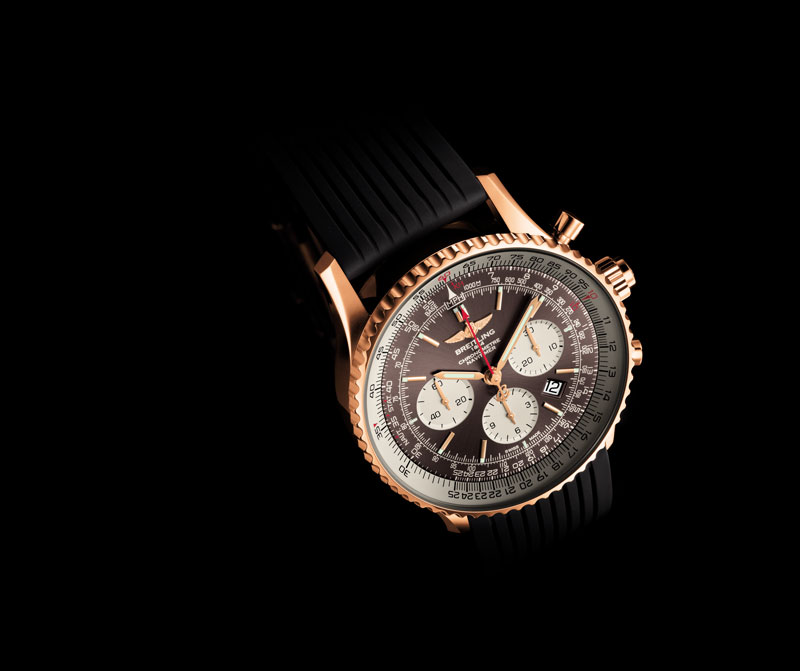 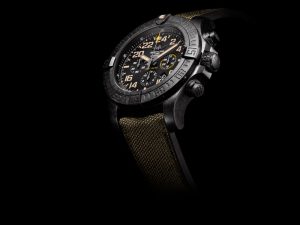 With its black avant-garde case in Breitlight®, its dial with aeronautical-type numerals and its selfwinding Manufacture Breitling caliber powering an exclusive 24-hour display, the new Avenger Hurricane Military limited series proudly displays the assets of an instrument for which prowess is the norm.

On this new version of this superlative-charged chronograph, issued in a 1,000-piece limited edition, Breitling has equipped the black dial with luminescent hands and numerals featuring a slightly patinated yellow-beige color evoking the instruments produced by the brand from the 1940s to the 1960s – a nod to Breitling’s longstanding heritage in the aeronautical and military field. But while the Avenger Hurricane Military thereby gives the distinct impression of having already undertaken a number of missions, it above all asserts itself as a watch built to face both present and future challenges. 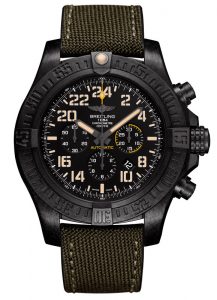 Breitling has indeed equipped it with an imposing 50 mm case in Breitlight® – an exclusive high-tech material 3.3 times lighter than titanium and 5.8 times lighter than steel yet significantly harder. It is endowed with a number of qualities (exceptional resistance to scratching, traction and corrosion, thermal stability, along with antimagnetic and anti-allergenic properties). This ultra-light and sturdy construction (water-resistant to 100 m / 330 ft) is enhanced by lateral protective reinforcements, a rotating rider tab bezel as well as pushers and crown featuring a non-slip grip ensuring optimal handling, even with gloves.

So as to set a unique and reliable cadence for timing impressive feats, the Avenger Hurricane Military is powered by Manufacture Breitling Caliber B12, a selfwinding chronograph movement displaying the time in an entirely original 24-hour mode, as typically used in the military and among pilots, and chronometer-certified by the COSC (Swiss Official Chronometer Testing Institute), a sure token of superior precision. The legibility of the 24 stencil-type aviation-inspired numerals, as well as the chronograph indications, is enhanced by a thick sapphire crystal glareproofed on both sides.

The exclusive strap also combines comfort and sturdiness, with a black rubber lining and sides, as well as an exterior in khaki-colored high-resistance Military textile fiber featuring tone-on-tone stitching. 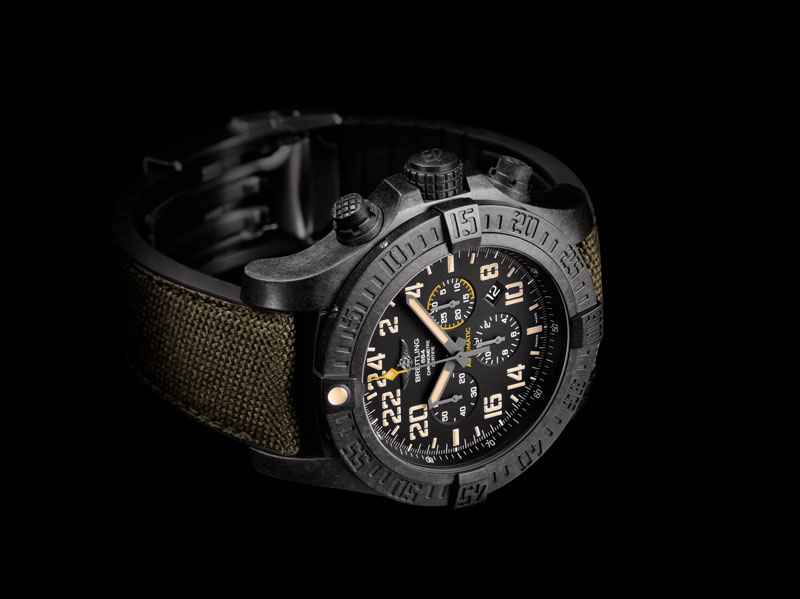