After a decade of residing in Oakville’s legendary lakefront property, Hugo and Tracy Powell have decided to start a new chapter in their lives and allow a new owner to continue the story of their beloved Chelster Hall Estate. Since it was built, Chelster Hall has become an integral part of the fabric that makes up the Oakville community. Hugo Powell and his family have appointed Christopher Invidiata and the Invidiata Team with finding the perfect new owner for this Canadian icon.

Hugo Powell was born in India. He spent some of his years in England where he studied at Charterhouse School prior to emigrating to Canada in 1971 where he became the president of Labatt Brewing Company. During his time in this role, a Belgian company called Interbrew SA purchased the company. A few short years after, Hugo was promoted to CEO of Interbrew at which time he, Tracy and their beloved daughter Britany relocated to Belgium. After he retired they returned to Canada.

Upon his return, Hugo Powell wanted to create a new home for his family that would endure the disposable nature of today’s modern society. He wanted Chelster Hall to be an estate that would stand the test of time and become a lasting legacy for both his family and the town of Oakville.

“My dream from the very beginning was that the home would play a role and be involved in the community,” Mr. Powell explains.

Mr. Powell entrusted luxury real estate expert Christopher Invidiata to find the perfect destination for this exciting project, which was not an easy task. A singular plot of land large enough for his envisioned home did not actually exist. Christopher advised that purchasing three properties to be combined as one was the best route for Mr. Powell to take, to which he replied enthusiastically, “Let’s get started!” Once Hugo Powell had decided on the 10-acre plot where the magnificent home now sits, he turned to architect William Hicks to design the estate of his dreams.

Throughout their life, Hugo and Tracy would find themselves taking trips back to England, and when they did, they often visited Blickling Hall in Norfolk, a small county where his mother had retired. They have told many that this English estate was the inspiration behind Chelster Hall. Blickling Hall was built over 450 years ago, but the Powells marvelled at what wonderful condition it was still in. This is what they wanted to achieve with Chelster Hall.

“My dream is that 450 years from now, a young family visits as I did at Blickling Hall and says ‘Gosh, this home is 450 years old, it looks great! It only looks about 100 years old’ and that it will have not aged a day from when it was conceived and it is being enjoyed by the community and the public in some appropriate way.”

The construction of Chelster Hall was not without roadblocks. William Hicks has said that the trickiest piece of piece of the puzzle was obtaining permission from the Town of Oakville to construct such an impressive building. The home’s original design would have been a total of 54,000 sq. ft., but was eventually scaled back to approximately 38,000 sq. ft. to meet the Town’s regulations.

Once approval was received, William partnered with Fil Cpuano on the construction who felt it was both an honour and a privilege to be a part of the Powells’ beautiful vision. In order to ensure that the main goal of the project was met, Fil constructed the entire home out of concrete, 2,800 cubic metres of concrete to be exact.

Hugo and Tracy are well known supporters of the Oakville and Milton Humane Societies. The design of their home features a separate, private chapel, the Chapel of Saint Francis of Assisi, where their family could go for prayer and silent reverie. The name of the estate is rooted in their love for animals as well. It is a combination of Lady Chelsea and Mancheter, the names of their family’s beloved golden retrievers.

Other features of the home include an indoor and outdoor swimming pool, a bowling alley, a home theatre, a state-of-the-art wine cellar, a sauna, heated floors throughout and much, much more.

And while Hugo and his family have loved Chelster Hall from the time it was nothing more than an idea and a vision, they are now ready to allow others to love it the same way. He this day would come when he build the home he hopes would last 450 years, and after a decade of residing within its elegant hallways, he is ready to see what happens next.

“It’s build to last. There will be new stewards. They will make their changes and additions, and the dream will flourish. That makes it easy for me to imagine the future.”

One of the most wonderful attributes of Chelster Hall is its fast potential. While for the past ten years it has been operating as a home, there are so many roles it could and so many services it could provide. 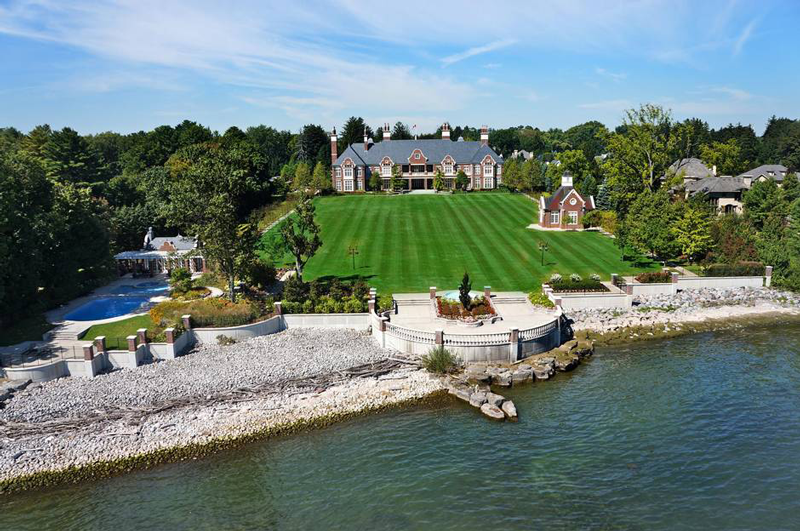 There are a number of other landmarks throughout Ontario that are similar in nature to the Powells’ impressive estate that are used for very different purposes. Alton Mill in Caledon, for example, has become a haven for local artists to display and sell their artwork. The Paletta Mansion in Burlington is owned by a hospitality company and has become one of the city’s number one wedding venues. In Toronto, Casa Loma is a tourist destination that draws quite the crowd from both within Canada and the United States. The possibilities are quite literally endless for what Chelster Hall could become in the years to come.

To arrange a private and confidential viewing of this property, please contact Christopher Invidiata at (905) 510-3424.