Basel, Switzerland is considered as one of the world’s leading places for completion of private aircraft. Jet Aviation, which has been crafting aircraft interiors since 1977 and counts over 200 completions to its name, is now ready and able to induct the Airbus Corporate Jet ACJ350 XWB.

on November 21,  Jet Aviation celebrated the grand opening of a new wide-body hangar in Basel. Designed to help meet increased demand for wide-body completions and refurbishments, ‘Hangar 3’ is capable of housing several wide- and narrow-body projects simultaneously. The company has long been recognized as one of the leading facilities in the world for design, outfitting, and refurbishment of private and executive aircraft.

space is the ultimate luxury in aircraft interior design and the ample space of a wide-body aircraft gives designers the greatest scope of freedom.

The Airbus 350, with a cabin measuring over 50 meters long and over five meters wide lends itself particularly well for design. The team at Jet Aviation Design Studio has created a concept that incorporates not only the increased space but also the extensive range that the ACJ350 offers. As technology allows aircraft to stay longer in the air, passengers on board must not only be entertained but also reassured. 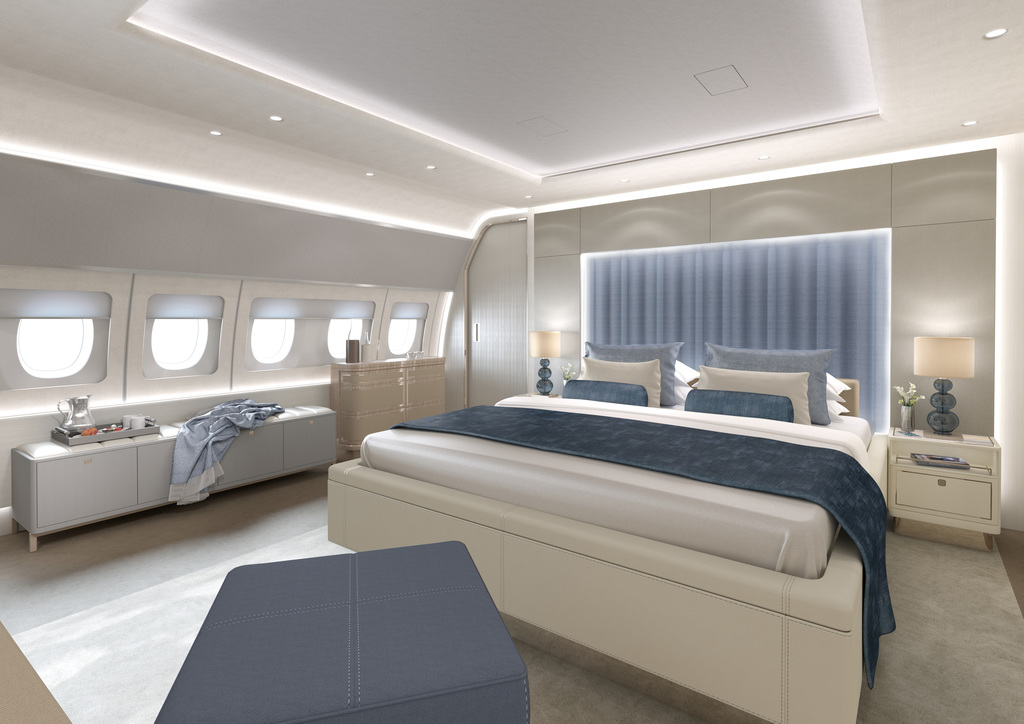 The designers developed three different design styles of a bedroom. This is the more personal and private area, which often sets the tone for the entire cabin design. They vary from modern and masculine, to contemporary, and finally to a more residential, classic style. In each variation, furniture was designed to appear free-standing, with invisible push latches rather than conventional aircraft fixtures and personal touches integrated throughout. A light colour theme featuring cream and sandy hues alongside warm and cool greys with blue accents runs across the entire concept. Detail and texture is introduced in pillows and throws, cabinets finishing and precious stones. Lighting also plays a key role. Humidity, heating and zonal air conditioning have also been considered to ensure maximum comfort for passengers spending longer time in the air.

The living space is flexible, featuring several different seating and dining configurations. The aft lounge area can be converted into two guest-sleeping areas with en-suite bathrooms. The A350 offers customers a spectacular new option for VIP air travel and the challenge for designers is to consider how to build the most comfortable and bespoke interior inside it.