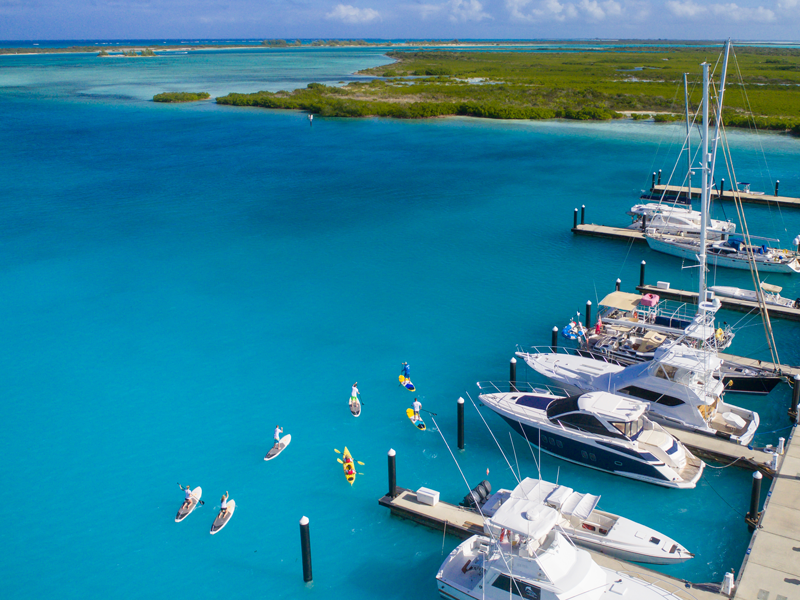 Conventional thinking in the dog eat dog world of commission sales, particularly real estate is, “If you ain’t the lead dog, the scenery never changes.” Todd Adair, owner of Cayman Marshall International Realty Brokerage, prefers “The strength of the pack is the wolf and the strength of the wolf is the pack,”  from Rudyard Kipling’s beloved children’s classic, The Jungle Book. He may prefer Kipling, but there is no arguing, the scenery has changed for his pack.

Opening a new real estate brokerage in the already crowded Port Carling market in 2012, with just three people, seemed risky. Building that business on a team first model seemed downright delusional. Adair speaks easily about “we” and “our”. He uses words liberally such as “together” “us” and even “family”, acknowledging that it sounds a bit “cheesy” but it’s apt.

Flash forward four short years. Cayman Marshall has grown to a pack of nine, with two locations and established itself in the market, evolving into one of the largest and fastest growing entities in Ontario. “From our humble beginnings in 2012 we easily reached our goal to hit the $200 Million mark for 2016. It was an ambitious target, and would require everyone to work together. If the team met it, I promised to take everyone and their partners away for a vacation.” As the year progressed and that $200 Million goal became a reality, Adair knew he would have to make good on his part of the bargain and did he ever.

As any parent knows, children are most revealing and genuine in their impromptu moments − drives to school, casual conversation while shooting baskets or chats over a late night bowl of Cheerios. The big stuff discussed formally at family meetings has a place but it’s the comments casually tossed out that are most revealing. Adair understands this dynamic and chose to facilitate such exchanges, in a big way. Determined to give his team the vacation of a lifetime and combine some team building along the way, he decided a mystery getaway was in order. Under a cloak of secrecy to which only one other team member was privy, they planned every detail. To build anticipation he only told them the basics: pack for somewhere warm, bring their passport and plan to be away a week. It wasn’t until everyone was gathered at the airport after being picked up by limo that he revealed their destination. Think fan palms swaying in warm ocean breezes, insanely clear turquoise waters, deep powdery white sand, rum drinks with little umbrellas, think Caribbean. Turks and Caicos to be exact.

Located 550 miles southeast of Miami, just below The Bahamas. Turks and Caicos was the perfect destination to celebrate, recharge and connect as a unit. Adair wasn’t prepared to spill every detail of the trip all at once, he shared tasty tidbits along the way, whetting their appetite. They knew where they were going, but had no idea of what was waiting for them. Assuming they were headed for an all inclusive resort or something similar, no one was prepared for what was to come. After being met at the airport the team was driven to the mystery destination and their home for the next seven days. Driving through the gates it became clear to everyone, this was no ordinary vacation.

While it was all inclusive, it wasn’t a resort. Three Dolphins Villa sits atop a quiet bluff overlooking Long Beach Bay, just steps away, renowned for being one of the finest kite-boarding spots in the Caribbean. The private villa comes complete with a cook, household staff, a large pool, tennis court, a life size chess game and lush landscaped grounds. After unpacking and re-grouping on the patio with a cool beverage, the warm trade winds began to smooth away the harsh realities of a January Muskoka winter, like physiological botox.

Never Leave Home Without Your Drone… 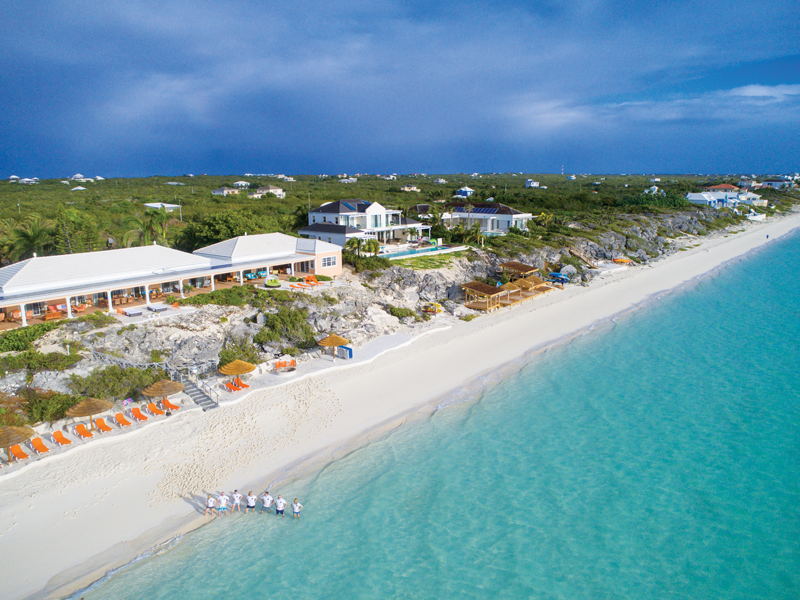 Adair had pulled off the “surprise” part of the trip, now to embark on the team building aspect. The first three days were to be a time for the team of Cayman Marshall to come together, then on the fourth day spouses and partners were flown in to enjoy the remaining time.

Over breakfast together, every day, he revealed a new and different adventure to experience, as a team. There were no “survivor style” challenges meant to pit people against each other and no “trust” challenges of falling backwards and hoping to be caught. No, Adair’s challenges were focused on fun with adventure thrown in.

Day one saw the group paddle boarding across a wavy and windy ocean channel to get to a secluded area of mangroves. Most had never done this so it became incumbent upon the team to help each other zigzag the gentle waves and stay upright against the winds, to get to the shallow water estuaries. It was a stunning visual experience, turtles, baby sharks, rays and schools of fish darted and weaved below their boards. It was also a workout and a subtle yet effective team building exercise meant to bond the co-workers through a shared physical adventure. 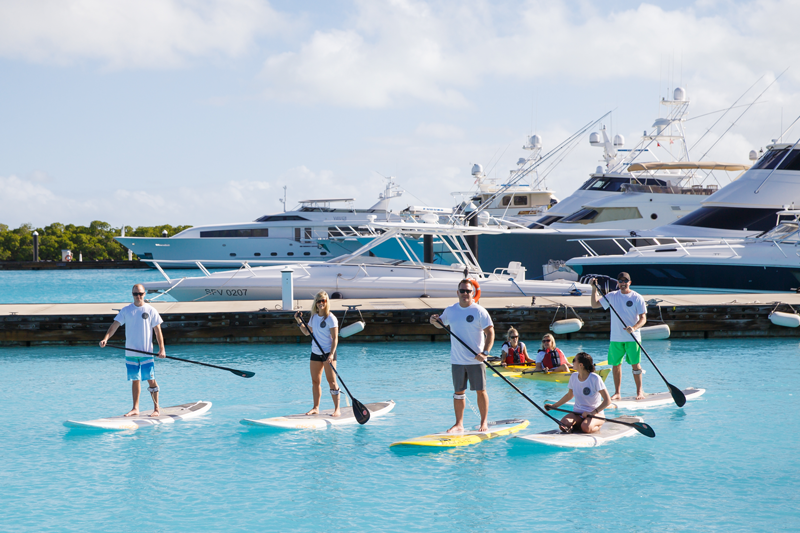 Day two, things became slightly more competitive. It was time for the pampered guests to hunt and gather for their lunch, which was to be a conch BBQ on a nearby deserted beach. First order of business however, was a snorkeling excursion. Being in Turks and Caicos means you are witness to the third largest coral reef in the world. It surrounds the islands providing protection from ocean surges, resulting in relatively calm and clear waters. Mike Arnold, one of the sales reps, is an experienced scuba diver and has taken part in dives all over the Caribbean. “It’s not unusual to see schools of colourful fish, they are prolific throughout the Caribbean. Where the Turks stands out is the size and abundance of the spectacular ocean life.”

After building up an appetite snorkeling it was time to actually hunt for conch, a large edible sea snail or mollusk. The intrepid snorkelers were taken to an area of shallow water where the conch could be found. Easier said than done. As it turned out Arnold was the one to feed the team as of the eight caught, he corralled six of them. It was off to lunch.

Along the way the boat captain moored on a chalk white sandbar where the team decided they needed to leave their mark, well more like a temporary tattoo. Like precocious toddlers in a sandbox, together they spelled out the initials CM and 200M, in the sand. Adair had been documenting the day with his drone and this picture became the defining image of the trip. Satisfied they had caught enough to eat, they arrived at the private beach, but true to form Adair had another surprise waiting for them. A full steak, lobster and chicken BBQ was all laid out; regardless of hunting abilities, no one would go hungry. Day three brought yet another surprise excursion, horseback riding through the ocean. 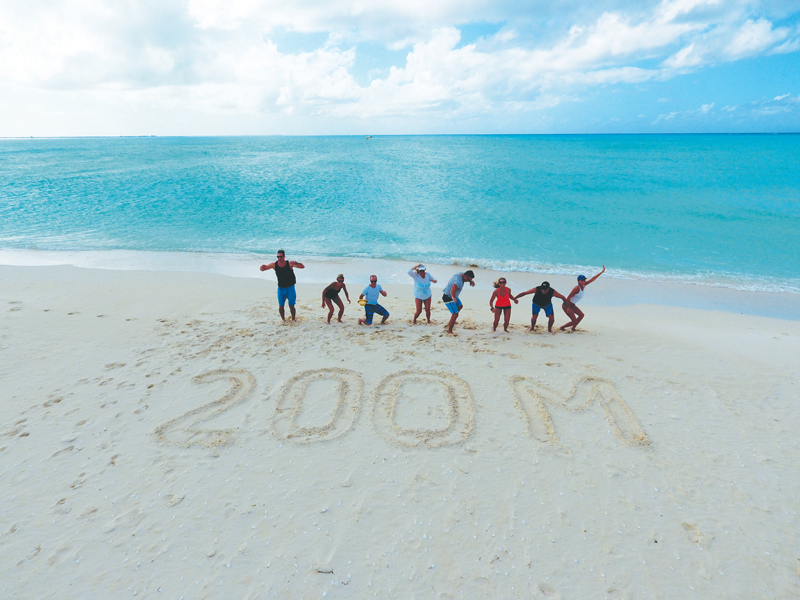 While clearly the planned activities were the highlights, it was the spontaneous moments that left lasting impressions. Over cocktails on the patio at the end of the day, laughing about their adventures or sharing breakfasts or nightcaps under the stars; this was when they really got to know each other. Adair noted, “It was as if the glue that already bonds us together as a company really coagulated.”

Business owners know, it’s their employees who contribute to the success of their companies. However, those business owners also understand for that to happen, employees need to work collectively to raise the company overall. That isn’t always as straightforward as it may seem, particularly given the inherent competitiveness of commission real estate selling. So how do you instill a pack mentality in a fiercely competitive and independent industry? In Adair’s world it starts with building a team that as he says, “…always has my back and understands I will always have theirs.”  He executes that philosophy by, “…providing positive, concrete experiences to strengthen the relationship.” Clearly he does more than talk the talk. 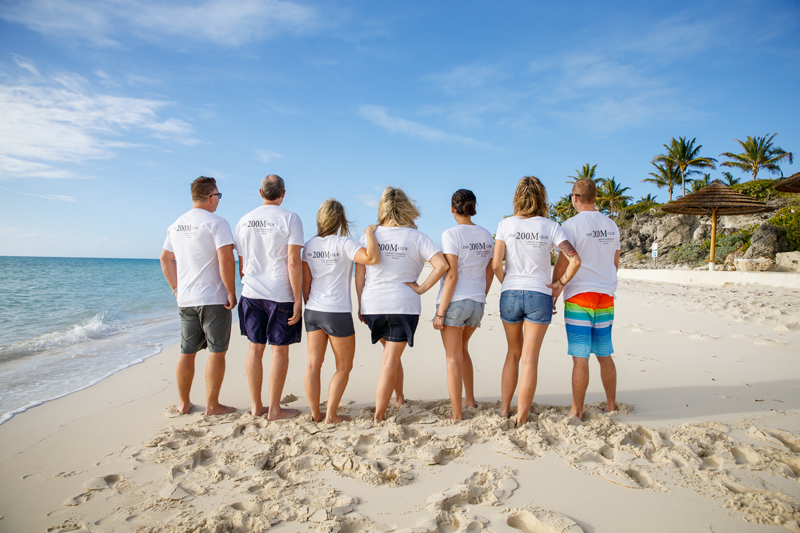 Employers all agree, team building is vital and a great way to open up dialog between co-workers. There are many “how to” business books, touting that philosophy. One in particular, Good to Great by Jim Collins talks about something known as: “Who,” before “What”. Collins maintains that it all starts with getting the right people on the bus first. Adair concurs. He believes the people on his team are there primarily because of the people on the team. He explains, “There is nothing better than being part of a team that is self motivated. They expect nothing but the best from themselves and know how to work together to achieve it. By starting with the right people, as team leader I can turn my attention to giving them the tools they need to succeed, together.”

The book, Good to Great, talks about companies as flywheels. Massive, heavy objects that only move because of momentum − mass times velocity. It takes immense effort to get that flywheel going just an inch, but as you keep pushing together as a team it starts to move faster and with each turn picks up speed, with its own weight propelling it forward. That is what he calls, “The Flywheel Effect.” The team of Cayman Marshall, under Adair, has put their collective shoulders to their flywheel and built tangible momentum in the Muskoka area. Adair does things differently, against the grain of typical business practices. He believes their success lies in the fact that their clients have gained confidence from their accomplishments, and his team has earned that credibility in the marketplace because of the quiet discipline of the Flywheel Effect. 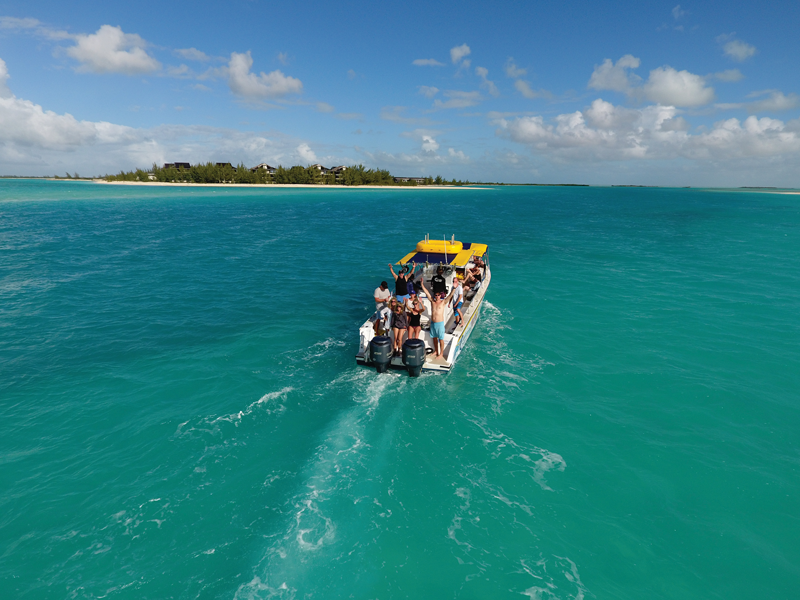 On the surface, this may only seem like an elaborate vacation to reward a staff of people for a goal reached, but look deeper. Just like impromptu conversations with kids in the car; it was over drinks on the patio at the end of the day, or walks on the beach that Adair’s co-workers really talked to each other. Conversations were about things other than potential listings or showings. Arnold who is relatively new to the team says, “I got to know everyone as people, not just co-workers. We all learned about each other’s lives outside of the office, it offered a more human interaction.” Everyone on the trip said they came away with a renewed sense
of team and shared memories. A time co-workers can look back on with fondness.

Adair wasn’t worried about the inherent risks of co-workers together under the same roof for an entire week, and then adding in the unknown element of partners and spouses to the mix. It could have been a double edged sword. Like atomic power, either generate light, or blow up like a bomb. Adair wasn’t worried for a moment, “My team knows and understands to their core, I’m all in.” He likes to say his success is based on breaking the usual business model for real estate sales. To him it isn’t just about meeting goals, it’s about building a great business with great people or why bother?

So, what’s next? More ambitious goals? No question. Bigger rewards? True to form it will remain a mystery, until further notice.